AP or IB? Which is Better for College Admission? 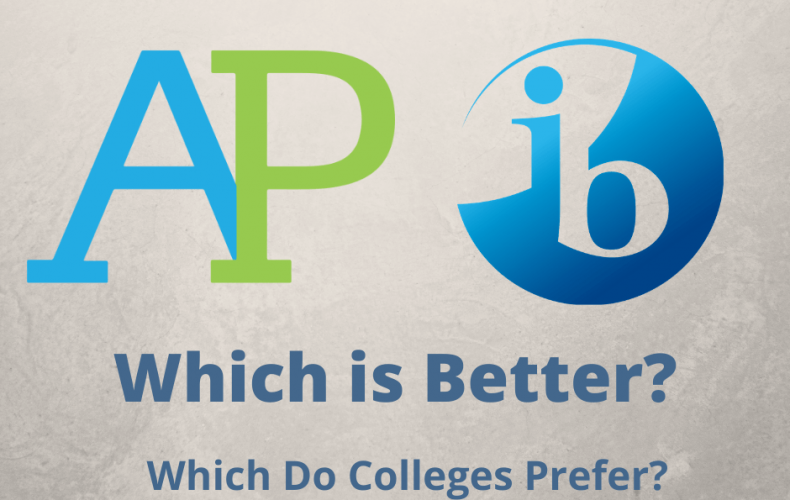 AP or IB? A prospective client emailed me yesterday with a question that is regularly asked of me when I give presentations on college admission.

Which is better, Advanced Placement (AP) or International Baccalaureate (IB)? Do colleges find one more impressive over the other?

In my opinion, both the AP and IB programs are equally valuable. In that the exams associated with those courses provide an external measure of quality. Any student who does well on the end-of-course assessments associated with either program can genuinely claim to have done college work in a high school setting.

The structures of the two programs are very different, however. Think of AP and IB this way. AP is a smorgasbord: pick the courses you want, leave behind those that tempt you less. IB, by contrast, is a “prix fixe” menu: you get all or nothing. There is a range of choice within IB, but the entire high school curriculum is dictated by those initial choices.

The fact is that highly competitive AP students are taking 6, 7, 10 AP courses and doing well on the exams (scores of 4 or 5 out of five possible points). Likewise, highly competitive IB students are not only taking the IB courses. But are scoring 5, 6, or 7s (out of seven) on the diploma tests. However, there are also plenty of students who take lots of AP courses who do not do well on the exams (many do not even take them!). Similarly, there are students in IB programs who are unlikely to fulfill all the requirements of the IB diploma.

As to whether colleges prefer AP or IB? Colleges like them both. Both programs represent tough curricular requirements. But in the end, it’s all about the student’s performance. Did they perform at the very top of the scale for either program? Did they pass the independently administered exams with flying colors? If so, colleges will be heavily recruiting those students, regardless of the AP or IB label.

How to choose AP or IB

For some students, the choice between AP or IB will be simple. Their high school may offer one or the other but not both. So if you don’t really have a choice, embrace the curriculum offered by your school. Also commit to doing the best possible job you can in that curriculum.

Some students may be considering a choice between two high schools. One that offers the AP and one that offers the IB. In this case, consider your own preferences. Do you want a bit more freedom to accelerate your learning in areas that interest you most? Do you want to double up in some subjects in which you perform extremely well, while dialing back on those that are not your cup of tea? If so, you may want to choose the Advanced Placement program. So, that you can pick and choose the AP courses that suit you best.

Consider the IB, if you tend to like a wide variety of subjects and perform well in all of them. Similarly, consider the IB if you would like to focus in on a particular subject during the two-year diploma program. Some students find that they get more out of their IB chemistry or physics courses. For example, because they dive more deeply into the subject over two years than they can during a one-year AP course.

You may also want to consider that while the IB program worldwide does offer quite a few different courses and curricular options, the reality is that in US public high schools and in the private schools that offer the IB, the range of curricular choices can be quite narrow. For example, there are usually only three different choices for courses in the sciences. Most schools can offer only one or two foreign languages, and the offerings in the social sciences are likewise restricted. The reasons for this narrowness are primarily practical. Smaller IB programs don’t have the numbers of students to justify a wide variety of subjects in certain areas.

Economies of scale dictate the choices. For example, an IB program in a small private or international school may not have a large enough enrollment to offer a full range of courses in the social sciences or fine arts. So look carefully at what the school does (and doesn’t offer) before you sign up for that school.

One thing I have noticed over my years of experience in working with students in both AP and IB programs is that IB students often have a harder time balancing extracurricular commitments and their social lives with the rigors of the IB diploma program.

The IB is an “all in” proposition: once you sign up for the diploma program, you have to complete all the requirements in all six courses plus Theory of Knowledge. Plus there are the additional requirements of the Extended Essay and CAS (“Creativity, Activity, Service”). In addition there are a variety of assessments and that keep the pressure on students to perform.

It can be very difficult for IB diploma students to focus on their extracurricular pursuits and still perform academically at the highest levels. Top athletes as well as those who excel in the performing arts sometimes struggle to balance all their commitments.

On the other hand, some students pursuing an IB program that is embedded in a large public high school can benefit from the camaraderie in the IB program. These students take virtually all of their classes together, and it is sometimes easier for students to create strong friendships with like-minded peers.

The cafeteria-style AP program, however, can be better for students who want to find a better balance. They can choose only those AP courses that interest them, and in which they feel the can (and want to!) succeed.

AP or IB? It’s all about high school

The wide range of choice and flexibility of the Advanced Placement program is a product of American educational values. We recognize that no two students are identical. Each student has the ability to select the subjects and level of challenge that is right for him or her.

So if you do have a choice between AP and IB, don’t focus on which will give you a better shot at the Ivy League. Both will do the job (as long as you perform at the highest level).

Rather, consider which curricular structure best suits your personality, learning style, preferences, and academic curiosities. And don’t neglect other factors, like your extracurricular priorities and your personality. These non-academic factors can be decisive.

This young man attended a small K-8 school for gifted and talented students. He was smart and attentive, and generally a pleasant young man with a lot of curiosity and academic ambition. He also was a little bit quirky and goofy. And he had a small, tight-knit group of friends who were as quirky and goofy as he. His primary extracurricular talent was piano. He could pound out a technically perfect and emotionally wrenching Beethoven sonata as if he were eating a peanut butter sandwich.

When choosing high schools, I encouraged him to consider the IB program at a school across town. There he would be among a small, tight-knit group of academically focused students. And where he could thrive within the relatively stricter confines of the IB diploma program. He eventually went on to major in computer science at the University of Chicago (which itself was a great fit for this academically serious, quirky, creative young man).

A strong musical and theater talent from a young age. Nick attended the same small K-8 school, where he had many friends. As a socially gregarious youth, Nick had nevertheless outgrown the social limitations of his small school. He was itching for new challenges. Additionally, the school with the IB program (which he could have attended with Andrew) was relatively weak in its music and drama offerings. His other choice was a large public high school with a Grammy-award winning fine arts program with three different orchestras, four different bands, and six different choirs.

He could also take an enormous variety of AP courses. Including music theory and juggle the responsibility of taking on lead roles in the annual musical. After taking 12 AP courses and earning a 35 o the ACT, Nick won several performing arts and academic scholarships at highly selective liberal arts colleges. He majored in music with a minor in Spanish. He studied history in Spain and won a research scholarship to study music in Cuba.

The importance of pass rates at your school

One thing parents (and students) ought to keep in mind as they look at schools and at individual teachers: ask about their pass rate. That is, ask what percentage of students enrolled in these programs take and pass (or get perfect scores) on the AP or IB assessments? The answer to this question will be a better indicator of program quality than the label. I have several clients who are getting very high grades in AP courses, but who will never be able to pass the AP exams. Their teachers are simply not up to the job of presenting such a demanding curriculum and helping students achieve to the standards set by that curriculum.

So to reiterate, both the AP and IB programs are excellent preparation for college, and the colleges seek out students to excel in either environment. Students and teachers should look beyond the labels to ask about the quality of the programs on offer. Just as we don’t judge books by their cover, we should not judge a program by its label.